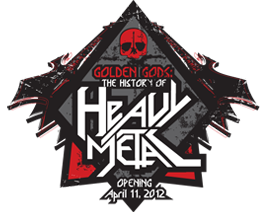 The GRAMMY Museum at L.A. LIVE, in cooperation with Revolver Magazine, debuted Golden Gods: The History of Heavy Metal on April 11, 2012 to coincide with the annual Revolver Golden Gods Award Show. Through rare artifacts from iconic metal bands and interactive experiences, the exhibit will teach visitors about the origins of Heavy Metal, its many subgenres, the bands that made Heavy Metal famous and offer a look into the controversy that has surrounded the genre for the past four decades.

The exhibit features never-before-displayed artifacts to give visitors a full overview of the vast history, and future, of Heavy Metal, including:

In keeping with the mission of The GRAMMY Museum, the exhibit will also house a variety of interactive exhibits, meant to teach visitors about the elements of Heavy Metal music including a vocal "scream" booth, double kick drum interactive featuring a tutorial on Heavy Metal drumming and Metal riff stations, highlighting the great guitar players of the genre.

Golden Gods: The History of Heavy Metal will be on display through May 2,2013.

Group tours of The Museum can be arranged. Please contact our Group Sales Department at 213.765.6800 (ext. 3) or submit your group tour request online.