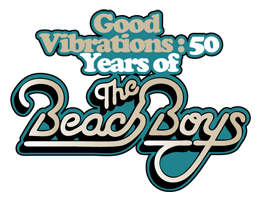 On September 18, 2012, The GRAMMY Museum unveiled Good Vibrations: 50 Years of The Beach Boys. Located on the Museum's fourth floor, this one-of-a-kind exhibit will offer visitors an in-depth look at the iconic career of The Beach Boys, who are currently celebrating their 50th anniversary with a major international tour, a critically acclaimed new studio album and commemorative hits to be released in October.

On the evening of the launch, The Beach Boys participated in The GRAMMY Museum's popular An Evening With public program series, appearing in front of a sold-out crowd. Titled An Evening With The Beach Boys, the event was hosted by GRAMMY Museum Executive Director Bob Santelli, and included a candid interview, as well as an acoustic performance by Brian Wilson, Mike Love, Al Jardine, Bruce Johnston and David Marks in the Museum's Clive Davis Theater.

On display through September 2, 2013, the exhibit will feature:

Good Vibrations: 50 Years of The Beach Boys will be on display through September 2, 2013.

Group tours of The Museum can be arranged. Please contact our Group Sales Department at 213.763.7923 (ext. 3) or submit your group tour request online.