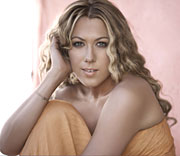 The GRAMMY Museum is pleased to welcome pop singer/songwriter Colbie Caillat to the Clive Davis Theater. Born in Malibu, California, Caillat debuted her first album Coco in 2007, with hit singles Bubbly, Realize and Little Things. Bubbly is one of the best selling digital tracks of all time. Caillat's second album, Breakthrough, released in 2009, debuted at #1. Later that year, she was nominated for four GRAMMY Awards, including Best Pop Vocal Album. Caillat won two GRAMMYs: One for her hit single Lucky, with Jason Mraz; and one for her collaboration on Taylor Swift's Fearless. Having sold over seven million albums worldwide and over 10 million singles, her third album, All of You, was released earlier this year and included the popular I Do and Brighter Than the Sun. Hear Caillat in discussion about her successful career, collaboration with artists such as Ryan Tedder, Common, Jason Reeves, Jason Mraz and Taylor Swift, and the recording of her latest album. After an interview with GRAMMY Museum Executive Director Bob Santelli, Caillat will take audience questions and perform a selection of songs.