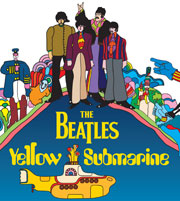 The Beatles' classic 1968 animated feature film, Yellow Submarine, has been restored in 4K digital resolution for DVD and Blu-ray release. To celebrate, we invite you to join us at The GRAMMY Museum in a special screening of the monumental film. Yellow Submarine, based upon a song by John Lennon and Paul McCartney, is a fantastic tale brimming with peace, love and hope, propelled by Beatles songs, including Eleanor Rigby, When I'm Sixty-Four, Lucy in the Sky With Diamonds, All You Need Is Love and It's All Too Much. When the film debuted in 1968, it was instantly recognized as a landmark achievement, revolutionizing a genre by integrating the freestyle approach of the era with innovative animation techniques. Inspired by the generation's new trends in art, the film resides with the dazzling Pop Art styles of Andy Warhol, Martin Sharp, Alan Aldridge and Peter Blake. Guests will return to "Pepperland," a place where music and happiness reign supreme, to relive the magic once again. Following the screening, Yellow Submarine Animation Director Bob Balser will take the stage for a discussion moderated by Executive Director Bob Santelli.