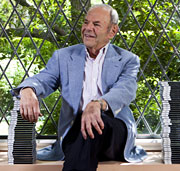 Beginning his career in music at the dawn of the rock-n-roll era, Joe Smith first worked as a disc jockey in his native Boston and other markets in the 1950s. Following his move, in 1960, to Los Angeles to work in record promotion, Smith eventually rose to legendary status as president of three major labels - Warner Bros., Elektra/Asylum and Capitol/EMI. Smith worked with such notable artists as the Grateful Dead, Van Morrison, Jimi Hendrix, Frank Sinatra, Jackson Browne, Linda Ronstadt, Garth Brooks and many others. Eventually, his relationship with the creative community over four decades enabled him to compile a history of popular music by presenting the artists' stories in their own voices in Off the Record: An Oral History of Popular Music. First published in 1988, the book offers insights and recollections from artists ranging from Bob Dylan, Artie Shaw, Barbra Streisand and Bo Diddley to Paul McCartney, Billy Joel, Mick Jagger, James Taylor and Ella Fitzgerald and scores of others. A few of decades following the success of his book, Smith (now 84) envisioned sharing his original unabridged interviews with scholars, researchers and the American public and donated the recordings to The Library of Congress. Hear Smith, along with veteran music publicist Bob Merlis, serving as moderator, in discussion about the Herculean feat of getting more than 200 artists to talk about their lives, music, experiences and contemporaries, as well as his background in the ever-changing entertainment industry. After the in-depth interview, Smith will take questions from the audience.