An Evening With Kenny Rogers 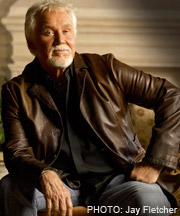 Kenny Rogers is one of the very few artists who has enjoyed successful careers in such a variety of genres — jazz, folk, rock, country and pop. For over five decades, the Grammy Award-winner has consistently found songs with universal appeal, drawing fans from many backgrounds with countless hits like Lady, The Gambler, and Islands In The Stream, and more, all which remain classics today. A gifted singer, songwriter, musician, producer, actor, photographer and entertainer, Rogers has sold more than 120 million records worldwide during his storied career. Join us, along with GRAMMY Foundation VP Scott Goldman as moderator, for a unique look into the life and times of music legend Kenny Rogers. During the event, you'll hear Rogers discuss his humble roots as a young musician in Texas, his experiences at the height of superstardom and his new album, The Love of God. Released on March 7, 2011, The Love of God is a collection of classic inspirational tunes that have touched the iconic entertainer through the years, along with several contemporary songs. After the discussion, Rogers will take questions from the audience.